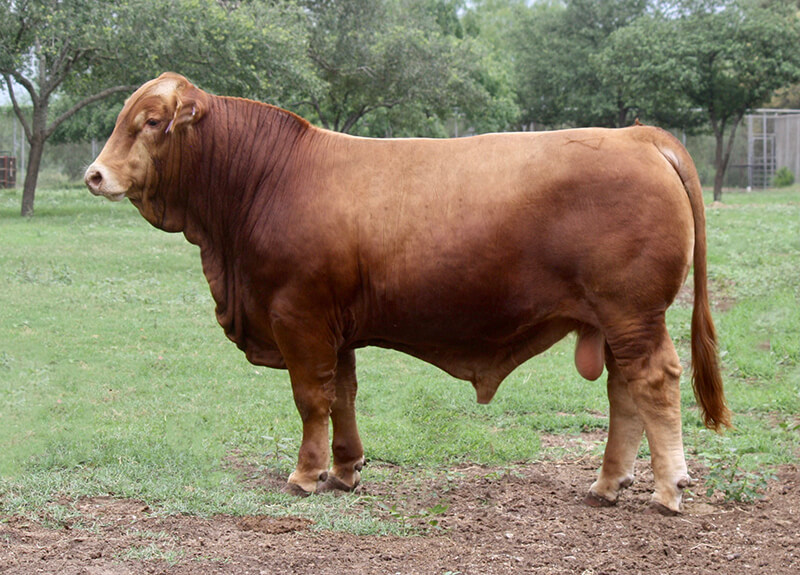 This bloodline first hit the scene when the popular LMC SSC Yolanda female made waves at the Black Label Event Sale.  Yolanda’s build and eye appeal captured the eyes and sparked the interest of several individuals from various breeds all the way up to Canada according to Katie Smith.  When auctioneer Jered Shipman hit the final gavel she demanded a price of $25,000, making her one of the top sellers heading to Madison Culpepper’s elite show string where she led her to several titles including the 2018 ASA National Championship and Reserve Grand Champion Female at the 2017 American Junior Simbrah Roundup.

Antonio’s sire is the former National Percentage Champion Simbrah Bull LN LMC 12th Man, who is sired by 6G/LMC Rajin Cajun and out of the LMC Mariah’s Dream “Delilah” donor.  All but one of the Grand and Reserves at the 2019 Texas major Junior Simbrah shows were Cajun granddaughters.  On the bottom side, his dam is the profitable LMC Daydream 5Z/173 donor that is one of the most consistent cows in the breed who’s purebred Simbrah heifer calves have averaged near $10,000.  Most importantly, she has the quality of udder you want your sire to be backed by from a maternal standpoint.  Daydream is sired by the International Champion LMC Rhino bull and out of the famous many times major champion LMC WFC Ms. Dream Girl donor.

Antonio demands the attention of visitors due to his thickness, eye appeal and correctness.  He is a stout structured bull that remains smooth throughout in his joints and is one impressive BEEF BULL.  His full brother LMC SSC Angelo is doing a solid job at Seale Show Cattle on numerous SimGenetic cows.  He is also a full brother to the 2019 Grand Champion Female at the Fort Worth Open Show for Caleb Fuchs and now donor for Seale & Guerra LMC SSC Catalina and is also a paternal brother to Carlos “Pops” Guerra’s 2020 Reserve National Champion Female LMC BBS Jennie Love.

LMC Thunder Bunny 5J/78 is a capacious Antonio daughter out of LMC Electra. We appreciate Higher Up Cattle for investing in this unique female. Photo by Sierra Franks in June 2022.