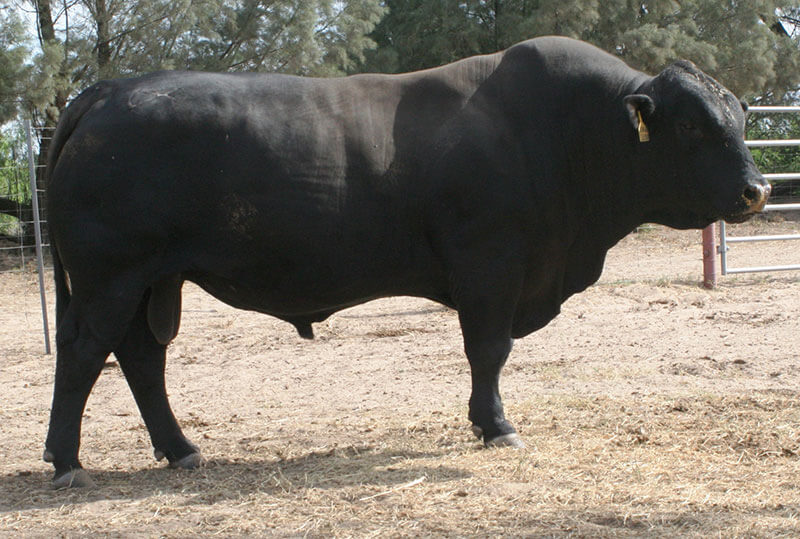 LMC RFI-SMITH Black Bullet is a solid black, polled, purebred Simbrah bull that was born on February 8, 2005. This HR Powerhouse x LMC She Moves sired calf was selected as the 2006 Houston International Grand Champion Simbrah Bull, he was the third La Muneca bull in a roll to be crowned with Simbrahs most prestigious honor. We used Black Bullet on our black cows for his first breeding season and calves should be here in the spring of 2007. His full brother Red Bullet has produced some great calves and we expect nothing less from this great young herd sire. La Muneca has attained full interest in Simbrah’s next SUPERSTAR and is offering ½ Interest at private treaty.

Black Bullet is a bull that is sure easy to like, you can look long and hard and not find a hole in this man. He is just SOLID. This solid black bull from head to tail is one of the most impressive in the breed, from his near flawless front end, to his explosive middle and rear 1/3s he is all there. Black Bullet has a phenomenal set of testicles and a clean sheath. He can cater to the clubbiest of club calf producers to every commercial cowman in the industry. Black Bullet has it all. If your looking to breed Simbrahs next great one, consider Black Bullet, he’s got the genotype and phenotype to do it for you.